Trail angels are people who help long distance hikers achieve their dream of hiking a long trail. Help may take the form of cans of pop chilling in a stream, a cooler full of snacks left along the trail, a ride into town. Sometimes they will even invite you home and let you take a shower, wash your clothes, have some dinner and even spend the night. Some towns sport trail angels extraordinaire: people that have almost a calling to help hikers. Some even have “trail angel” listed on their business cards.

In one town I met such a trail angel.  He offered a ride to the motel outside of town that I wanted to stay at because it also had a laundry mat nearby and a grocery store for buying food for the next section of trail. He gave me his business card and said to call him when I wanted a ride back to the trail. The next day I called him, left a message on his cell phone and proceeded to check out. When I turned around there he was.

A woman that I had been hiking with was meeting her husband and was staying another night. I wanted to wait for her but all the rooms in town where full. He said that he was caretaker of a cabin in the woods that I could stay at. He wanted to show it to me. We drove into the woods but some blow downs blocked the way. I told him I planned to stay at a hostel down the trail a ways.

I was hanging out in town talking to another hiker when he drove up. He invited us home to his house for dinner and said that he would drive us to the hostel afterwards.

We went back to his sparsely furnished apartment and he fixed a wonderful and generous dinner of steaks, salad, and ice cream for dessert. But he started drinking whiskey while he cooked. By the time dinner was over he was drunk and we knew that the only way we were going to get to the hostel was walking. About then it started to monsoon and even though the man was getting weirder and scarier by the minute we didn’t want to forge out into the rain.

He said we could stay there. I soon tired of his rambling, pulled out my sleeping bag and tried to sleep. He rambled on about being summoned to the White House, and how he was a restaurant critic and other crazy stuff. He talked about two hikers who had spurned his invitation and said people like that make a person want to wait 50 miles and then hire someone to jump out and slit their dog’s throat. He rambled on to the other hiker long into the night. At first light I hurriedly packed up to try to get out of there before the trail angel woke up. The other hiker gave me a thumbs up and did the same. I left a note thanking him for dinner and his hospitality and walked away.

It wasn’t long, before I see the guy driving up asking me where I was going. I told him I was heading back on the trail and that I didn’t need a ride or anything. I met the other hiker at the register, a book where all the hikers where putting in their e-mail and snail mails address as a way for people they had met on the trail to get back in touch with them. He was erasing his address, afraid that the trail angel would stalk him further. He said it made him think more carefully about who he took hospitality from.

On the trail, life is beautiful and grand. The people you meet are people who took a big leap and are living out their dream. When meeting someone like him, it’s like finding your twin, that you never knew you had, locked in the attic, pasty and weird.

I went out to in the dark to fetch some wood to make the evening fire. Very close, probally within 20 feet of me, a mountain lion screamed. I screamed back and tried to scare it away but it just kept screaming. I dropped my wood and ran back inside. That mountain lion has been coming around since I broke my ankle 2 years ago. I don’t know if there is a connection but I was thinking that maybe it thought I was easy prey.

I drove to Sechelt on a rainy end of summer day. I found a beautiful hostel in Roberts Creek to stay at: Up the Creek. Today I’ll find someone to boat me home to my cabin. I’m really looking forward to kicking back on the couch with a fire going in the wood stove and a hot beverage beside me. Up there, there is always time. Time to look out at the changing water and just think. Time to carefully read books. Time to take leisurely paddles in my kayak and long walks in the woods. No distractions; just life. 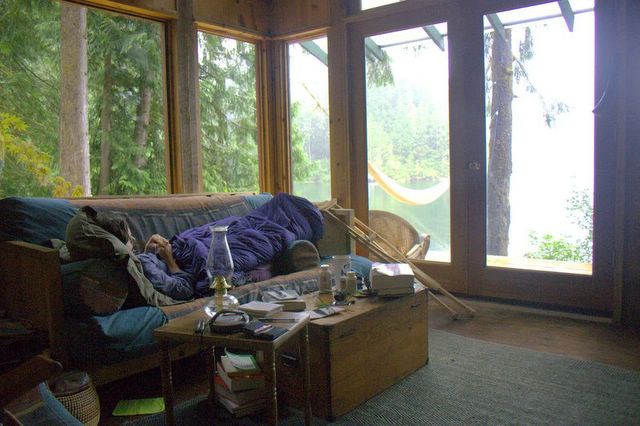 When I worked in Coos Bay, on the days that we would get rained out, I would head to the West Coast Game Park Safari petting zoo. There I would buy ice cream cones filled with feed to feed to the animals roaming about. They had baby bears and lions that you would get to pet and hold and large animals that were held in cages that didn’t seem strong enough to hold them, adding an element of fear to the petting zoo experience.

The deer were the friendliest, at least until my feed filled cones ran out, but the llamas never did like me and would spit at me if i tried to pet them. 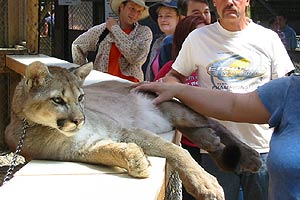 Once when I was very unhappy I went out walking in the dark, in the city, in the fall. It was cool, wet, windy and dark. I had a walkman on listenig to a Bruce Springstein tape. I walked for along time that night and even though I was really miserable part of me thought it was a wonderful night.

No more the mundane; beauty and adventure awaits; seize the summer.

Arcadia West is being sold. The dream of living in a beautiful waterfront cabin is done and now, it is time to move on. This cabin has served me well.

When I came here, I just wanted to be left alone, in a beautiful spot, and at this cabin I found it. Realizing that I didn’t need anything, not needing to consume to be happy. My days were spent in quiet solitude just going about the business of living.

I sit on the deck of my wilderness cabin as I write this. A soft coastal breeze is blowing, bringing with it the scent of the sea and the cedars. The sun shines through the trees; it makes the water sparkle. The water laps at the beach , the birds sing and I think, how lucky I am to have this place. But it is time now to live other dreams and let someone else have their turn at paradise.
And so with gratitude for this place I prepare to leave.

When James was about five, we lived with my parents, in a house that sat on a hill, overlooking a meadow in the foreground, and one of Portland’s city forests in the background. There was a large picture window to enjoy the view.

One Easter I hid the colored hard-boiled eggs outside. James soon woke up and went searching for his Easter basket. He was busy examining its contents when a large black raven flew past the picture window with a brightly colored egg in its claws. Then another raven flew past. We stood at the window and watched the ravens find all the eggs.

I bought 60 acres and a cabin. The property is pretty but one of my neighbors is giving me a hard time. His last name is Harvey and he is rude and mean. All the neighborhood is united in thier hatred for the Harvey klan. I hope they will leave me alone. I have talked to a deputy sherif, about them cutting my chain that I use to lock my gate. The deputy said to get a lawyer and talk to DNR. I called the DNR and they told me to barricade the road. One of my neighbors came down with his backhoe to help me push some big rocks in the road. The Harveys came by this morning and they were going to cut my fence but I think he saw me because he changed his mind and said that he knew a different way around. Then he said, “that fucking bitch”.

I wish there was a small livable planet for sale.

I got a laptop today. Now I need to find some great piece of earth to build a cob house on.

Success is not the key to happiness. Happiness is the key to success. If you love
what you are doing, you will be successful. — Albert Schweitzer

My winter project of helping sell my son’s house and moving him and his wife to Portland is done. I’m tired and unbalanced. I’m heading to the coast in hope of renting one of the State parks yurts for awhile. Or maybe just camp. Then I need to get my affairs in order and find some land.
Right now I wish I had a home.

Finally! Amazon.com: Books: A Million Random Digits With 100,000 Normal Deviates
Was this review helpful to you?  (Report this)