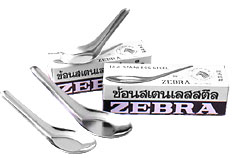 For eating on the trail all a person needs is a spoon. My favorite spoon was a metal Chinese spoon I got in Thailand. It held big bite fulls of food, had a good edge for digging into hard frozen pints of Ben and Jerry’s, and it fit into my small pot for storage.  Update: zebra spoon for sale

I carried that spoon for 4 years, but one day, in my cabin, it just disappeared. I found them on the internet at http://www.culinox.co.uk/acatalog/usparts.html, but they don’t ship to the US.

It is generally agreed among hikers that a spork makes neither a good spoon nor a good fork, but I decided to try out this

Light My Fire Spork because it has a spoon on one end and a fork on the other. The spoon is okay, but the fork doesn’t really have enough curvature to be useful and it sometimes pokes me in the hand when I’m using the spoon. If they had just built a colorful Chinese spoon they probably would have been better off. Still, the spoon part is okay and it is colorful.

Update on the Light My Fire Spork.  I carried this spork for awhile on the PCT(Pacific Crest Trail) in my food bag.  It broke.  It’s not very sturdy.  Would probably be okay if kept in your pot.

When I was taking an Outward Bound course it was a common event to lose a spoon. People improvised a spoon with a shell, a rock, a stick, or a drivers license. One woman used two sticks like chop sticks when she lost her spoon.