When I came back home after hiking the PCT, I went to Thailand for the winter, (as my job was seasonal and I didn’t have to work winters), to take a cob cottage building class. After the class was over, I decided to head to Laos.

When I got to the Laos border, I found they were no longer issuing visas at the border so I had to stay in Thailand. On the bus back, I met two teenage boys that had been over in Laos visiting one of their fathers. I was the only Westerner on the bus so they decided to practice their English on me. They said, “In my village all the people get up at 4 am., where I live no one wears shoes. Where I live, no one eats meat. Where I live we all keep the 5 precepts: No lying, no stealing, no sexual misconduct, no intoxicants, and no killing.” I asked where they lived and decided to check it out. 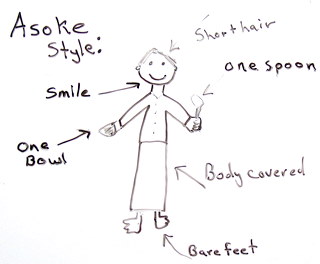 When I got there the next day, I found not really a village but an intentional community that was a little perplexed as to why I was there. They however gave me a place to sleep, introduced to me the English-speaking nun, fed me, and asked me where I wanted to work. I could chose from the herbal medicine shop, the mushroom farm, the fruit and vegetable gardens, the sewing shop, the dump, or compost making. I choose the herbal medicine shop. 2 months later, I was still there and loving it. I taught English and worked in the herbal medicine factory. The people were all so nice to me. I thought it was a wonderful place to live. The village stressed simplicity. There were two meals a day but you were supposed to try to only eat once a day. If you were only eating once a day the people would say, “Oh, very good.” You were supposed to be up a 4 am and you weren’t supposed to take a nap during the day. You were also supposed to go barefoot.

When the nun would go out almsing in the mornings, sometimes I would go with her in a practice known as bin da bawt or something like that. It means walking in the path of a nun. I would follow behind her. One day they put new gravel down, she had thirty years of walking barefoot, but I thought my tender feet would start bleeding.

I wasn’t spending hardly any money at all, maybe a dollar a week, when I would go into town to use the internet and maybe get a treat. Since I wasn’t spending any money I figured I didn’t need to make any money. So I started thinking about instead of returning home and going back to work, of going home and selling my house and all my stuff and moving back to the Asoke village in Thailand.

On my way back, I got the idea to sell my house and buy a piece of vacation property with the money, that could be rented out by the day or week. Then, if I wanted to come home I could tell the management folks to stop renting it so I could move into it. While looking for some practical piece of vacation property I found my dream property, a beautiful cabin on the water and bought it. Since I had my dream cabin I went there instead and have never made it back to Thailand or work.

So far things have worked out okay. It’s pretty cheap to live in a primitive cabin. For five years I didn’t have a laptop, solar panel, or telephone. Now that I do, I can tell you that those things don’t make things better, they just make things different.

One thought on “My time at Sesa-Asoke village and how I ended up not going back to work.”