After hiking a long trail, I will come back home and for a long time afterwards, I will have flashbacks of being back on the trail. There is only one other thing that has effected me this strongly; playing Ultima V on a Commodore 64. For those who’s computer life began in the last 10 years, you don’t know what you missed.

Back then computer games were not just pretty pictures with linear story lines, they were engrossing well told stories that you lived. When I would get lost in the woods, 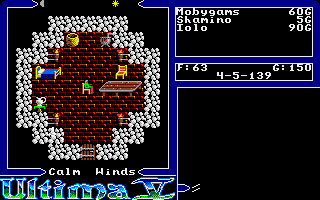 in the game, I felt like I really was lost in the woods. When I had to sneak past the guards into Lord British’s chambers in the middle of the night, my heart would pound.

The graphics were just little sprites but the world they created seemed so real.

Not only was the game complex and long, the Commodore 64 was flexing all of its scrawny muscles to play it. I would stare at the disk drive as it went ” bonk, bonk, bonk,” spinning away. Sometimes it would just keep on spinning and banging and I would have to turn it off and start again. Some scenes were so slow to load that I had time to do some dishes while I waited.

The game came with a cloth map of Britannia and an ankh to wear around my neck. I made a notebook full of information: everything, everyone in the game told me and where they lived. 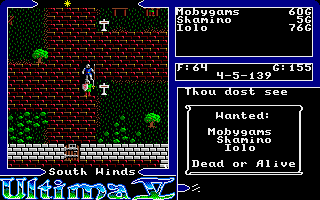 It wasn’t a linear game. I was always on multiple quests so I would never come to a spot where I was stuck; there was always something to be doing.

Once after playing all night I laid down and went to sleep. Next thing I know my son was trying to roust me awake saying he had missed the bus and needed a ride to school. I asked him when was the last time he had saved his game, because he could just quit and go back and set his alarm. He said, “Help! Help! My mom’s stuck in a computer game.” I got up and drove him to school. I had driven him to school and was on my way back before I realized why that wouldn’t have worked.

I played the game to the very end and won without the help of any cheats. It took me about eight weeks of constant play to finish the game. When I got to the end, I wrote to the writer of the game, “Lord British”, as I was instructed to. I signed the letter in runes.

I miss Ultima. Those were the days. You felt like you were just at the begining of what computer games would evolve into. Who would of guessed we had already reached the pinnacle.

3 thoughts on “Adventure on a Commodore 64”