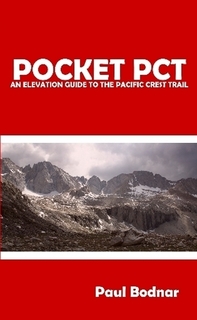 I found this little book on the Internet.  It’s called  “Pocket PCT— An Elevation Guide it the Pacific Crest Trail.”   It weighs 3.8 oz(108 grams) and covers the entire trail.

I’ve never used it or even seen it but it looks really useful.   I may try it out the next time I hike the PCT.

It cost 19.95 which is 10 dollars more than the Wilderness Press PCT Data Book but I was thinking it might be more accurate.    The Wilderness press data book is missing some important water sources and it doesn’t always show you when you are at the top of a climb.

The Pocket PCT is built around an elevation profile of the entire 2655 miles of the Pacific Crest Trail from Mexico to Canada. The mile-by-mile elevation profile is represented in chapters, each beginning and ending at a common resupply location. The detailed profile shows water sources (each rated by reliability), water cache locations, resupply points, and hundreds of other landmarks such as campgrounds, roads, creeks, rivers, and trails. Symbols identify each point of interest and includes that point’s elevation (and directions if off-trail). Commonly used resupply point addresses and other information is included in the back of the guide, including directions to each resupply point from the trail.

It doesn’t have any maps in it, but maps and way points for the entire trail can now be downloaded for free from Halfmile’s Pacific Crest Trail Map Site