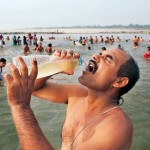 Several years ago, I decided to look at trail water like something akin to the way devotees look at the Ganges River—holy and safe to drink.    That worked out okay for me on the Pacific Crest Trail and I can say I’ve hiked the whole PCT and never treated a drop, although sometimes I would filter out the floaties with my bandanna. 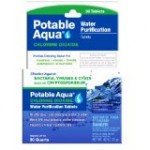 Hours before heading out to hike the Arizona Trail, however, my faith wavered and I stopped in at REI to purchase some chlorine dioxide tablets to throw in my bag—just in case.

I’m glad I did because I encountered a water source that tasted so strongly of cow shit that I couldn’t keep it down.    I broke out my tablets and poof my water tasted good.

I encountered worse sources on the Arizona Trail.   One was an almost dried up pond fully surrounded with acres of cow shit.  If that wasn’t discouraging enough, there was a guy with a jet ski in the little pond going around and around stirring up the muck.  He kept getting stuck because it was so shallow.

It would have been a funny sight if it wasn’t the last water for 40 miles and I wasn’t hot and water stressed.    I walked up to him and asked him to quit spinning around while I get my water.   He said, “I wouldn’t drink that if I was you.”    He said the pond usually had a lot more water in it.

I was hoping he might offer me some water but he didn’t.   He had a gallon of water on the tailgate of his pickup and I should have offered to buy it from him for any price but I was feeling too emotionally fragile to risk getting turned down.

I walked on with my muddy, cow shit water hoping that maybe I would find something better.   Several miles later, when I came to a road crossing.  I walked up to a house in the distance, told the guy that I was very disappointed with the last water source, and asked if I could have some water.   I worried he would say no but I later heard that in Arizona, if someone asks for water you have to give them some.   I don’t know if that’s true but it sounds like a good law to me.  Anyway, he gave me some water and got me out of that pickle.

I met a water treatment worker hiking the Arizona Trail.   One of the ways he treated his water was to use a pinch of alum to settle the mud.   I looked it up on Wikipedia and apparently this is an ancient water treatment method that clears the water by making the fine molecules clump together and sink.    Here is the science behind this. 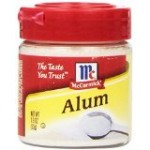 So heading out to the Continental Divide Trail, later that same year, I brought a little container of alum with me.   You can buy it in the baking aisle at the grocery store.

In the Great Basin in Wyoming,  I came to a water source that was little more than a mud puddle,   I strained it through my bandanna, put a pinch of alum in it,  took a nap, and when I woke up it had cleared. 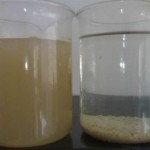 When I first gave up treating my water I carried giardia meds with me– just in case.  I bought them from a pet supply store.