After a month at my BC cabin, I have made it home to my winter cabin on the sunny side of the mountains. It’s been 5 months since I left it and I as I drove home I wondered if everything would be alright. Would I come home to find someone had stolen my solar panel and my chain saw? If I came home and found that I had been robbed I thought I would just buy a ticket to somewhere and go.

But as I got to my locked gate, it was just as I left it. I was tense as I drove up to my cabin and was relieved to find everything untouched.

As I unlocked my cabin I noticed the window in my front door was frosted over. I opened the door to find my entire cabin coated with a thick white dust. Some of my books had been knocked of the shelf and lay on the floor covered in this mystery stuff.

There were no foot prints in the dust and it was as complete a job as could be done. It wasn’t just horizontal surfaces everything was coated even vertical surfaces.

Thinking this may be a diabolical threat on my life and possible anthrax, I thought I should save a sample to have it analyzed.

After taking pictures to document this malicious dust attack, I started throwing everything outside. I tried to vacuum but I could only vacuum for a minute before the filter would plug.

Suddenly I had an idea of what it might be. Up in the loft I have a large fire extinguisher. I went to check it and sure enough it was empty and the hose was hanging loose.

It had apparently gotten so hot in my cabin that the fire extinguisher blew. If you have ever wondered what happens when a extinguisher goes off in a small cabin let me tell you. The stuff goes everywhere. Under the couch is heavily coated, the walls, the windows everything. It blew with such force that it blew my books off the shelf.

Man, what a mess. So I went into town, bought a shop vac, and washed everything. 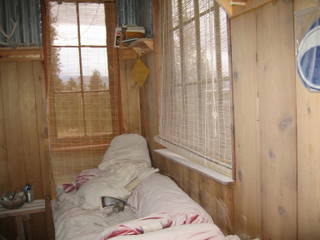 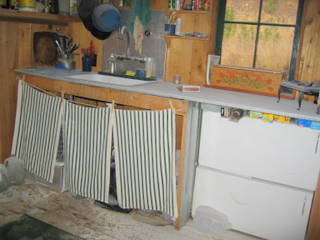 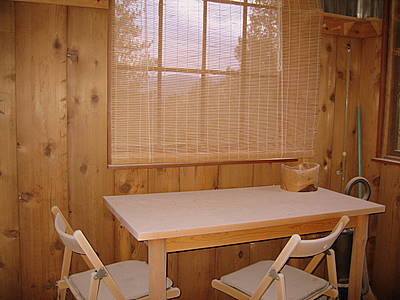