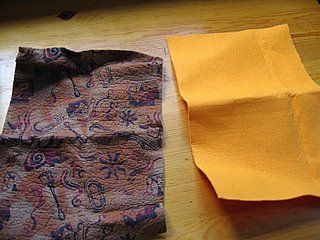 always carry a camp towel.   It’s a viscose towel that absorbs 10 times its weight in water, then you ring it out and it absorbs more water —like a sponge.    It’s great for sopping up puddles in your single walled sil-nylon tent or wiping off after a shower.

So one time I’m hanging out in a motel room watching TV, when on comes an infomercial  selling camp towels– except they were called “Sham Wows!”  and claimed to pick up 21 times their weight in water instead of the measly 10 times as my camp towel.

“Wow!”  I  enviously thought, “That Sham Wow is twice as good as my camp towel.  I would really like one of those.”

Well,  dreams do come true,  as one day I’m walking through the dollar store and I see the coveted “ShamWow! —as seen on TV– absorbs 21 times it’s weight in water”  and it’s only a dollar.

I brought it home, cut it down to to the same size and weight as my camp towel, and set about to document the  vast improvement over my old camp towel.

Results: Both towels weighed .75 ounces and absorbed pretty much the same amount of liquid–8 ounces.

The ShamWow was only a buck and the camp towel was 10 dollars and I think the brighter color of the ShamWow will make it less likely to get lost, but if you already have a camp towel, no need to covet the ShamWow! because, despite its claims, it’s  an ordinary camp towel.

Tip: Use a safety pin to hang your wet camp towel off your pack to dry.

Related Post: Keeping the inside of your tent dry

2 thoughts on “Camp towel versus ShamWow!”