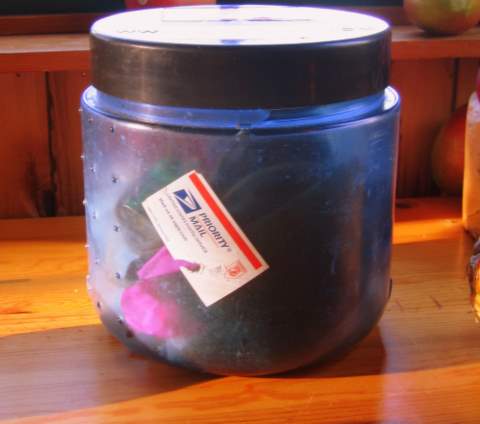 It was  4am and I was lying in my frosty tent in the Sierras, thinking how splendid a hot beverage would be right now.  I was hungry as I hadn’t eaten dinner the night before because I was low on food and one of the ways I ration my food is to skip dinner.

I was thinking: for the same weight as the bear canister I could have brought my stove, pot, fuel canister, and 5 snicker bars.   Right now, I could be drinking a hot beverage and eating a snicker bar.   That would be good, but instead I have a bear canister.

The next food was 50 miles a way and it wasn’t 50 easy miles.  It was 50 of the hardest miles on the PCT.    I angrily broke camp, stuffed my  icy tent into my pack, and stomped off into the darkness.

Although I was mad and hungry there was a little part of me excited about the challenge of hiking 50 miles without food.

About 10am  I met a couple that I had been seeing off and on since Ashland.   I told them my bear can story.   He tried to open it but couldn’t get it to budge.    He brought out a big pocket knife and tried to pry it open with the can opener.   He brought out a tent stake and picked up a big rock and tried to break open the lid.     Nothing.   Then his wife straddled it and he tried turning it with all his might.   It finally, to my great joy,  opened.

I never locked it again.  From then on I slept with my unlocked can next to me.

I told someone I met on the trail  my bear can story.  He told me he had to take a lighter to his lid to soften up the plastic.

I bought the bear canister in ’07.  When it arrived at Kennedy Meadows, I couldn’t open it.   Someone else wrestled it open for me.      A couple days later the same thing happened but again someone else was able to open it.   I thought then that this bear can could be trouble, but after that I didn’t have a problem with it.

I used it again in ’08 through the Sierra’s and didn’t have any problems with it but then I usually sleep with it and leave it unlocked.

Billy Goat carried a bear can for the first time this year.  The same one as mine but  his was the new one with 2 locks.  I warned him not to lock it but he accidentally locked the first lock and couldn’t get it opened.   I tried to open it but I accidentally locked the second lock.   Another hiker was able to open it using some tool.  He was mindful of never locking it again.

On the Bearvault website they say they will send you a free tube of lube for your canister.  Maybe that would help but I’m not sure I would risk being locked out of my food again.   And since I’m not going to lock it, why carry it.